You are here: Home / Life / Buenos Aires Rolls Out the New ‘Metrobus’ on 9 de Julio
Spread the love 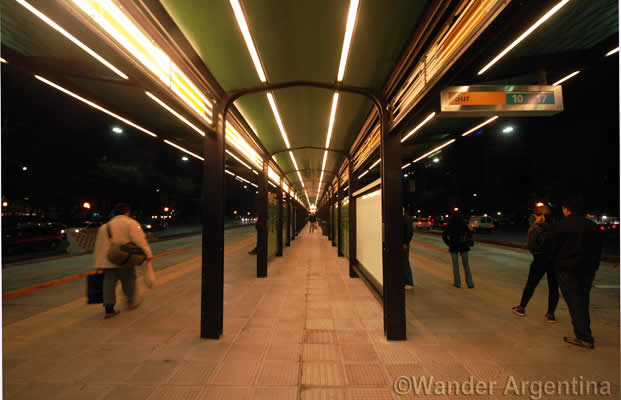 Some Buenos Aires residents are resting a little easier these days now that the city’s Metrobus along 9 de Julio was inaugurated on July 24, after six months of construction.

The new rapid transit bus-only lanes divert colectivos that previously ran down the narrow streets of San Telmo, Monserrat and Microcentro along Chacabuco/Maipu and Piedras/Esmeralda streets.

But as passengers waited for the bus Sunday evening one man became so enraged that he began to shake his fist in the air and yell, “What the hell is this for? Just to get votes?” He was referring to the mayor, Mauricio Macri, who pushed for the project as part of his efforts to make Buenos Aires ‘the first green city in Latin America’. Macri has his eye on the 2015 presidency.

Margarita Gomez, 66 was waiting for the bus with her disabled son, Jesus 30. “This is for the rich people. We live in Belgrano and our house was flooded last year. They need to take care of that first – people died!”

Gomez says that she thought the new medians between lanes on 9 de Julio were too narrow, making her worried for her blind son’s safety. “We also have to walk further now,” she added. “There used to be stops every two blocks and now they are every four blocks.”

Another passenger, Luciana Perez said, “I have to walk further to catch the bus too, but this is improving transportation in the city. I think it’s a good change.”

To ride the whole segment of 9 de Julio will now take between 15 to 20 minutes. It previously took 55 minutes to move along this segment of Argentina’s most famous street. The buses will run 24 hours per day, stopping at 17 locations, and pass every two minutes at rush hour.

Since the project began, citizens and politicians complained that the costs seemed suspiciously high, it is aesthetically unpleasing — requiring the removal of costly planters that were just installed under the last mayor — and questioned the efficiency of the new rapid transit.

The construction of the 9 de Julio Metrobús segment also angered many residents because it required the felling of more than 100 old trees and altered the landmark Plaza de La República, where the Obelisco is located. The city promises to replant 550 trees along the new bus lanes and says it has reduced travel times on Juan B. Justo by 40% and 50% on 9 de Julio. 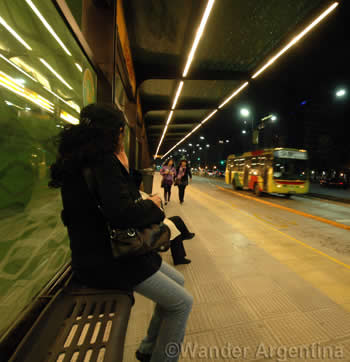 “This is an historic transformation.” said Macri at the July 24 press conference as pro-Kirchner protestors chanted nearby. “This improves the quality of life for hundreds of thousands of people who travel everyday.”

The final part of the rapid bus transit project, the Metrobús Corredor Sur is now under construction. It will connect areas further south of the city to Constitución train station along 22km on two lanes.

The Metrobus costs the same as a regular bus and the fare can be paid with coins or the Sube smart card. To get familiar with the new routes, Buenos Aires bus passengers may want to update their Guia T Buenos Aires bus guide.