You are here: Home / Featured / How to Speak Spanish Like an Argentine
Spread the love 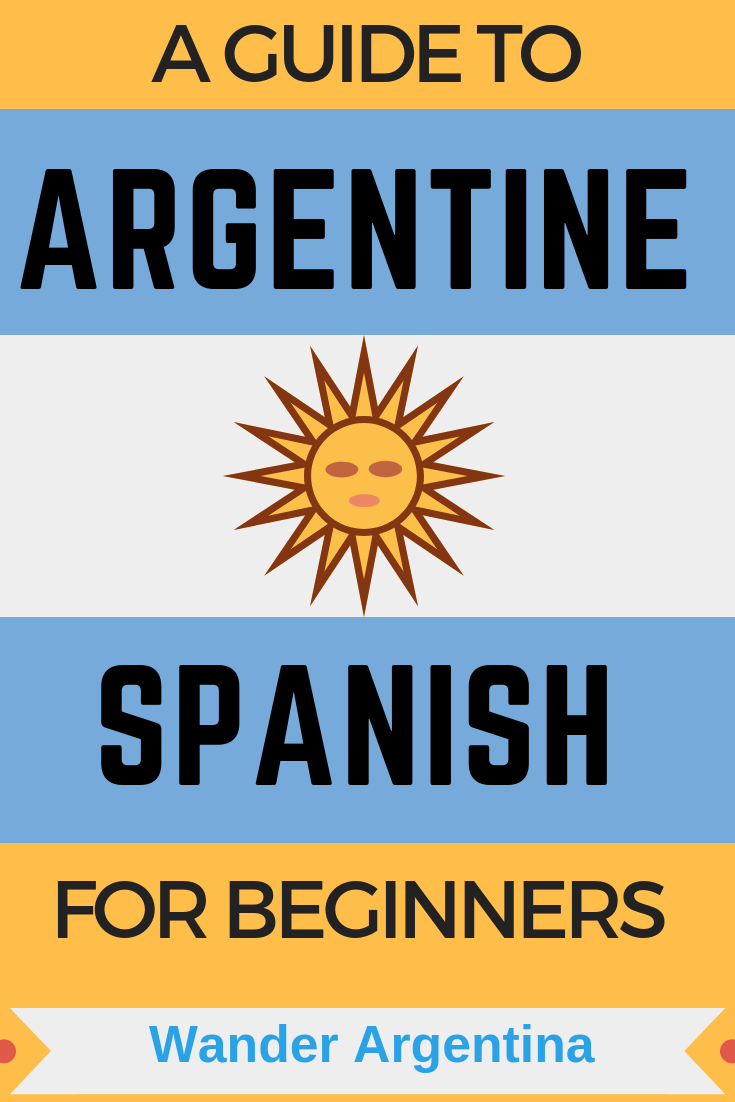 It takes about two minutes after arriving in Argentina to notice that Argentine Spanish is distinct from Iberian Spanish and the U.S. ‘food truck Spanish’ of those who only took remedial Spanish in school.

At first, it sounds like bastardized Italian and it differs considerably from the Spanish spoken in other countries of Latin America, mostly because of the accent, the use of ‘voseo’ and differing vocabulary.

Argentina’s unique Spanish is due to the massive waves of immigration to the country from the mid 19th and until the mid 20thcentury. The majority of Argentina’s immigrants were Italian, and their influence is easily noted in the sing-songy modulation of Argentine Spanish.

The Italian influence on the language in Argentina is most evident in the Rio Plate region, with their emphatic and animated manner of speaking, along with the lingo (including the local slang called lunfardo) peppered with Italian words.

Thanks to those immigrants, Argentina’s Spanish has also absorbed words from Italian — one example is Argentina’s common farewell of ‘chau,’ – it’s is just an alternate spelling of ‘ciao.’

Why they call it ‘Castellano,’ not Spanish

Argentines typically refer to their language, not as Spanish, but ‘Castellano’ (pronounced ‘Castesh/ʃ/ano’). Castilian, as it’s called in English, refers specifically to the dialect from the Castilla territory of Spain, spoken by most Spaniards. The word ‘Castellano’ is essentially synonymous with Spanish, but referring to it specifically as ‘Castellano’ is done to delineate it from other languages also spoken on the Iberian Peninsula, such as Basque, Galician and Catalan.

A google search for ‘Argentine Spanish’ brings up results such as the article, ‘Why You Shouldn’t Learn Spanish in Argentina.’ Despite the fact that the author shares the surname ‘Kirchner’ with two prior Argentine presidents and the current vice president, the author argues that Argentina is a bad place to learn Spanish.

While it is matter of personal preference and personality, we at Wander Argentina disagree.

* Click here to get a free trial of Amazon’s audible program where you can listen to many books, or watch movies in Spanish to improve your language skills. *

Why You Should Learn Spanish in Argentina

An added bonus to learning Spanish in Argentina is that — despite the Argentines somewhat unfavorable reputation among other South Americans — native Spanish speakers from other countries secretly admit they love the Argentine accent — they think its sexy.

Of course, if you learn Spanish as an adult you will probably have a non-native accent regardless of where you study (unless you’re Dustin Walsh, the ‘Yankee Argentino’). But after gaining fluency in Argentina it can be fun to speak with native Spanish speakers from other countries, who will have no problem understanding you, but may be inquisitive about your unique ‘gringo-Argentino’ accent.

Speaking Argentine-style Spanish with those from other places is an immediate conversation starter!

Those who have studied Spanish in other countries will be thrown for a loop when they get to Argentina and are repeatedly confronted with the question, “¿De donde sos vos?”

Argentines use voseo, instead of the tuteo for the informal second person singular. This is one of the most unique aspects of Argentine Spanish.  Why they got to be so weird?🤷 When the Spanish came to Argentina in the 15thcentury, ‘vos’ was still in use in Spain. Argentina, being at ‘the end of the world,’ was isolated until the 19thcentury, so the ‘vos’ form stuck, as the language evolved elsewhere.

Everywhere in Latin America where ‘vos’ is still used are regions that were somewhat secluded through the last few centuries, but to the majority of Spanish speakers, the ‘vos’ form sounds archaic.

Today most of Argentina (as well as in Uruguay, and some pockets of Paraguay and Central America) use the ‘vos’ form in everyday speech, as opposed to ‘tú’ for the second person informal.

The exception is in some outlying Northwest Provinces of Argentina and areas dominated by immigrants from other countries of Latin America who grew up using the ‘tú’ form.

In Argentina the formal ‘you’ — ‘usted’ is used much less than in other countries, such as Colombia or Costa Rica. The general rule in Argentina is that the ‘Usted’ form is reserved for superiors (at work, for example), authority figures or elders — otherwise use ‘vos’.

The good news is that using ‘vos’ is simple. Only the verbs ‘ser,’ ‘haber and ‘ir’ are irregular in the vos form and the conjugation for the last two are the same as when using, ‘Tú.’

The verb ‘ser’ is the most irregular *sounding* conjugation: it’s ‘vos sos’  in the ‘vos’ form, instead of ‘tú estás.’

For regular verbs simply remove the letter ‘i’ in the ending and you’re good to go.

Those who never learned the ‘vosotros’ form can just follow a simple rule for the present tense conjugation of ‘vos:’ Drop the ‘r’, add an ‘s’ and throw an accent on the last syllable (-ás, -és, -ís).

⇒ Argentine Spanish: A Guide to Speaking Like an Argentine: The Complete Lessons.

Note that the conjugation for ‘Vos’ is only different from ‘Tú’ in the present indicative form and the positive imperative form.

After a few weeks of immersion study, language learners be happy to use the ‘vos’ form – there are a lot less irregular verbs to memorize (as opposed to ‘tú’) and using ‘vos’ gives you added street cred.

The imperative (command) form of ‘vos’ has no irregulars, with the exception or the verb ‘ir.’

Check out some of the common verbs which are irregular in the ‘tú’ imperative form but not irregular (and quite simple to conjugate) in the ‘vos’ form below.

The verb ‘ir’ (to go) is a special case both in the present indicative form and the positive imperative form – using the ‘vos’ form, the verb ‘andar’ is used instead of ‘ir.’ So, in the present tense, instead of saying, ‘tú vas,’ in Argentina, one would say: ‘vos andas.’

In the imperative form of ‘ir,’ instead of saying (tu)‘vete’ to command someone ‘to go,’ (vos) ‘andáte’ is used.

‘Tu’ is still used as a possessive pronoun utilizing the vos form though: ‘¿Vos me prestás tu auto? (Are you going to lend me your car?) Orations such as, ‘El libro es tuyo‘ (The book is yours), or, ‘La casa es tuya‘ (The house is yours), are also constructed the same using vos.

Another particularity of Argentine Spanish, and why it has its ‘sexy’ reputation is that ‘y’ and ‘ll’ are pronounced ‘shh,’ or ‘Zh’ (depending on the area).  So ‘yo’ sounds like ‘sho,’ ‘calle’ sounds like ‘kayshe,’ and ‘te llamo cuando llego’ sounds like, ‘te shamo cuando shego.’ The difference isn’t too hard to understand after a couple of weeks.

As noted in our article about Argentismos, the word ‘che’ is unique to Argentina and used frequently to draw someone’s attention.

And while in Spain ‘vale’ is used to mean ‘okay,’ in Argentina the word ‘dale’ is used instead. ‘¿Viste?’ (you know?) is a filler word used frequently (especially among young women) at the end of sentences. Another common filler phrase is ‘¿Qué sé yo?’ (what do I know?). Once in a while ‘yo qué sé’ (I have no idea), as it would said in Spain, is also heard.

It’s important to know that the verb ‘coger’ (which is frequently misspelled as ‘cojer’ in Argentina) is not used in Argentina as it is in Spain, where it means ‘to get/ to grab/ to take/ to catch.’

If you misuse ‘coger’ in Argentina, you will hopefully amuse — and not offend — someone, depending on who you are addressing.

‘Coger’ is considered a vulgar word in Argentina and is used exclusively to refer to having sex (specifically ‘to f*ck’). This is definitely something to be aware of before telling your new teacher, ‘Paso a tu sala a cogerte a las 7:00 p.m.’

Instead  of ‘coger’ the verbs ‘tomar’ or ‘agarrar’ are used (unless you are actually talking about getting it on!).

Verb Tenses most Used in Argentina

The past participle form of verbs — ‘yo he ido’ or ‘el ha tomado’ — are rarely used in Argentina. Instead of saying, ‘El ha ido a Europa doz veces,’ an Argentine would say, ‘El  fue a Europa dos veces.”

The simple future tense is also rarely used, except in writing. Instead the immediate future tense is used. This means sentences are constructed with the subject (yo/vos/ el/ ellos) +ir+a+ infinitive verb. So you with you will hear phrases such as, ‘Voy a tomar el colectivo’ instead of ‘Tomaré el colectivo.’

Being able to not worry about a couple of verb tenses for a while is just another benefit to learning Argentine Spanish.

Lunfardo – the expansive slang of Argentina

Last but not least is lunfardo, Argentina’s expansive slang, which is a language all onto its own with thousands of vocabulary words.

Wander over to Wander Argentina.com to learn more about the history of Lunfardo and some common phrases.

Vocabulary: Words that Differ in Argentina

Not a vocabulary or intonation difference, but Argentines speak with their hands a lot and use a lot of different gestures.

Mimicking others and using ‘sign language’ with your hands can be a good tool in the early stages of learning a language, especially to make up for gaps in vocabulary. Those who learn Argentinean Spanish may find themselves naturally gesticulating more than in their native language, if they mimic their passionate, hand-waving hosts. Doing so also helps those who are patiently trying to figure out what you are trying to say. Think of it as a constant game of Pictionary and it becomes much more fun.

If you want to be a rebel and take the courageous ‘road less traveled’ to learn Argentine Spanish, check out Online Resources for Learning Argentine Spanish and Spanish schools in Buenos Aires.