Wander through Buenos Aires’ streets, parks and plazas and you will see an abundance of abandoned animals. Nowhere in the city is the stray animal population more noticeable for visitors than in the ‘Jardín Gatonico’ (or ‘Cat Garden’) as the city’s Botanical Garden is sometimes jokingly called.

Amongst the exotic trees and plant life of the 70,000 sq. meter Palermo park live an estimated 1,000 stray felines. Although life is rough for these former house-cats, relatively speaking, the Botanical Garden is stray cat heaven.

The cats survive thanks to small armies of area residents, who faithfully come to provide food, water, medication, and sometimes organize mass sterilizations to try and reduce the population. Still, new cats are abandoned here daily. They have no cover from bad weather or loose dogs, are exposed to disease and eat irregularly, despite the neighbors’ good intentions. They also harm the exotic plants and stink up some areas of the park. 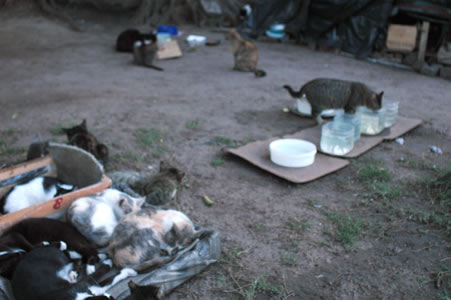 Pet overpopulation is obviously not a problem unique to Argentina. In the United States at least 7 million, unwanted cats and dogs are euthanized every year. Only a few countries have successfully addressed the overpopulation problem without killing animals, most notably, Norway, Sweden and Germany where neutering pets is the societal norm.

City-wide in Buenos Aires there are an estimated 750,000 to 1 million domesticated animals — nearly one animal for every three residents. Many of them end up on the street. In the past, the Argentine government used methods considered especially cruel to kill strays, including gas chambers and strychnine poisoning. In some rural areas newborn kittens and puppies are simply drowned. The city of Buenos Aires and some Argentine provinces, such as Mendoza, have since passed laws banning euthanasia as a means of animal control, but have found that when neutering programs get cut, the animal population quickly multiplies again.

Thou Shall Not Kill

The Argentina sector of the non-profit World Society for the Protection of Animals (WSPA); SENASA, the national organization in charge of animal control; the Argentine Association of Veterinarians and the Society for Veterinary Medicine came under attack at the end of 2010 when they collectively approved of euthanasia as a ‘last resort’ measure for aggressive, sick or ‘unadoptable’ street animals. Animal protectionists say the WSPA criteria for putting stray animals to sleep is subjective and view the decision as a thinly veiled approval of euthanasia to control the country’s animal population.

Negative reactions came from animal rights groups and Argentine politicians across the spectrum. A Facebook group called ‘Que Se Vaya WSPA de la Argentina’ (Get Out of Argentina WSPA), created in reaction to the recommendations garnered almost 300 members in a few weeks before it was mysteriously shut down by Facebook on January 23. The protectionists’ central complaint is that the official bodies protect the pocketbooks of private veterinarians and the pet industry instead of animals. It costs the city AR$5 per animal to sterilize strays; euthanasia costs AR$50.

Frustration among the city’s vocal and numerous ‘unofficial’ animal protectionist groups, made up of the citizens who spend their own time and money caring for city’s strays, has been building for years as their personal resources are tapped out.

Within two months the public veterinary hospital was closed. Meanwhile the city’s government had changed hands. The city’s new administration, headed by mayor Mauricio Macri said the hospital came unequipped, in debt and that the center’s seven employees were never even paid. They decided against allocating the additional funds needed to equip and maintain the hospital, saying it wasn’t designed to fulfill its purported purpose and accused Tellerman of corruption. Tellerman, for hist part, denied any wrong-doing and blamed Macri’s administration for the animal hospital’s failure.

The building sat empty for over a year while various groups appealed to the city to occupy the building, until finally it was converted into the new Precinct 30 police station. Now Macri’s Pro party plans to make it up to animal protectionists and their furry friends with a new Animal Protection Agency.