You are here: Home / Life / Popemania: The Good and the Bad
Spread the love

The aftermath of the March 13 selection announcement and Tuesday’s inaugural mass of the first South American Pope sparked lively debate both in Argentina and around the world — and provided comedic gold for others.

A few publications came out punching. A Salon article titled, ‘Is the New Pope a Fraud?’ questions his ideology.

An article in The Guardian took a closer look at the new Pope’s role in the church during Argentina’s 1976-83 military rule, as does an article by Buenos Aires-based liberal blogger, Samuel Ward.

Bergoglio was the head of the Jesuit Order at the time of Argentina’s ‘Dirty War.’ Among the accusations are that he did not do enough to prevent the detention and torture of two priests, Orlando Yorio and Francisco Jalics. The priests were later released, say Bergoglio supporters, thanks to his behind the scene efforts.

A follow-up article in The Guardian about Bergoglio’s relation to the military junta features one of the priests, Francisco Jalics who now says that while he once thought the new pope was somehow involved in his detainment, he no longer believes that is the case.

While under Bergoglio’s leadership, the Bishops of the Catholic Church in Argentina collectively apologized in 2010 for not doing more to protect followers during the dictatorship, but also condemned left-wing guerillas of the era. An article in Boston Magazine says that the new Pope needs to speak out more forcefully on the topic if the church wants to continue to be considered a guidepost on human rights issues.

Mainstream outlets were considerably more favorable in their coverage, including a Fox News story ‘Huge Heart — New Pope Preaches Church Core Values with Compassion,’ by our very own Rosie Hilder: 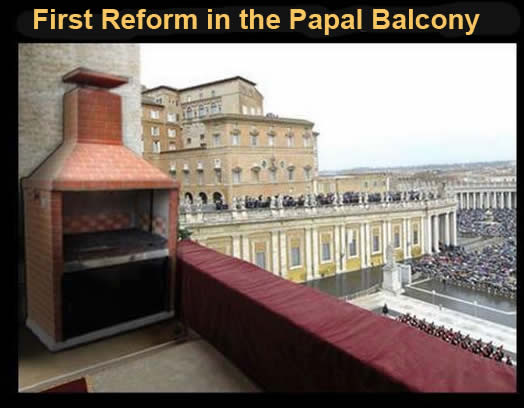 The election of a pope from South America was considered groundbreaking, but as everyone who has been to the continent’s second largest country knows, Argentines are Italians who speak Spanish and Bergoglio, the son of Italian immigrants, is not far removed from the homeland. Nevertheless the election of a South American pope (albeit of fully European heritage ) was a strategic choice for the church, since the largest concentration of Catholics — 40% — are from Latin America.

Since the Pope rose to the position as Cardinal of the Catholic Church in Argentina in 2001, Bergoglio has been known for his humility. He spent time in the slums surrounding Buenos Aires, could be spotted taking public transportation around the Argentine capital, and lived in a basic dwelling instead of the official church mansion in Buenos Aires.

In the land where soccer is the real predominate religion, the new pope was known to be a fan of the San Lorenzo soccer team, much to the dismay of those who are proud of their pope, but support other teams.

President Kirchner’s Reaction to the Election of Pope Francis

In recent years, Argentina has made sex education mandatory, approved gay marriage, and championed the most progressive transgendered rights in the world. Not surprisingly, the Catholic Church has clashed with the government over these policies. Bergoglio, while serving as the Argentine Cardinal, unsuccessfully requested a private audience with Kirchner many times during her presidency. He also criticized the current administration for corruption from the pulpit. 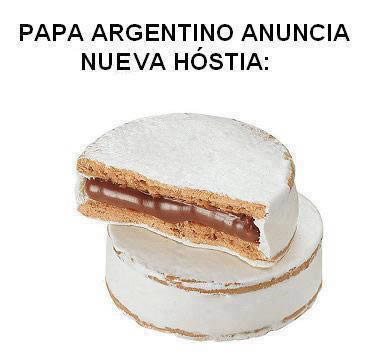 Cristina Kirchner, for her part, has called the pope ‘a relic of medieval times’ while commenting on his gay marriage stance.

Kirchneristas, as those who support the Kirchner government are called, were the most aggressive in speaking out against the new Pope in Argentina on social media sites, but with the world’s eyes watching, Kirchner herself put her grudge aside.

Kirchner congratulated the pope by letter and later joined other world leaders in Rome for the March 19 papal inauguration. She met with him in the Vatican City earlier in the week for the traditional Papal-Head of State meeting. The new Pope greeted Kirchner with a kiss on the cheek, as is customary in Argentina, and she presented him with a traditional Argentine mate (tea) set.

Kirchner also asked the new Pope to intervene in the Malvinas/Falklands conflict on Argentina’s behalf. While he was leader of the Catholic Church in Argentina, the Pope spoke in favor of returning the islands to Argentina.

Kirchner seemed unsure of protocol when in the presence of the pope, asking onlookers at one point, “I can’t touch him? Or can I?”

At a press conference after the meeting President Kirchner exclaimed, “I’ve never been kissed by a pope before!” 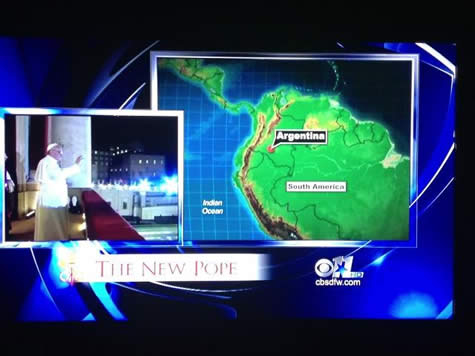 The election of an Argentine Pope and the antics that followed seem to be the comedic gift that keeps on giving.

After the election, soccer legend Diego Maradona, sometimes referred to as ‘God’ by loyal fans, released a statement on March 13: “The God of soccer is Argentinian, and now the Pope is too.”

A twitter user named AndresCR tweeted along the same theme, writing, “You can tell the new pope is humble, any other Argentina would have named himself Jesus II.” 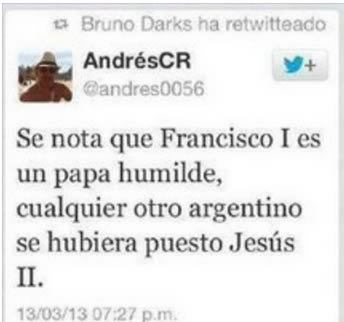 Among the memes floating around social media in Argentina are one with a parilla (Argentine barbeque grill) installed in the Vatican. Another showing an alfajor, or traditional Argentine cookie, says “Argentine Pope announces the new sacramental bread.”

Even the new pope’s first day on duty brought some laughs — The Daily Mail reports that he put a call into a secretary who refused to believe it was him.

Another somewhat dubious article from the Catholic News Agency reports that the new pope also personally put in a call to his former Buenos Aires newspaper delivery man to cancel his subscription.