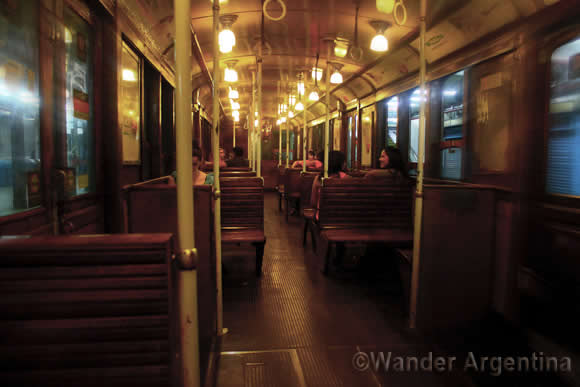 After nearly 100 years the “A” Line of the Buenos Aires subway – or Subte – is being shut down for renovations to the tracks and the replacement of some of the aging rolling stock.

The oldest of the cars date from the 1913 and are made of wood. Modern carriages manufactured in China will replace them. The city plans to shut down the subway from January 12 for a period of two months in order to replace the cars. Although the new cars will have air-conditioning, security cameras and a higher safety standard there will be fewer cars operating, which may slow service.

The current subway cars were built in Belgium for Latin America’s first subway line. The 90 wooden cars scheduled for replacement are the oldest subway cars still in use in the world and carry 160,000 passengers daily.

While a challenge to maintain, the antique cars are a tourist attraction along the historic Avenida de Mayo.

Though the carriages are functional, they are considered dangerous for passengers and are noticeably void of air-conditioning, causing them to be oppressively hot in summer.

Die-hard fans such as Aquilino Gonzalez Podestá, founder of Friends of the Subway, agrees the cars need to be replaced but wonders why the work can’t wait until the line’s centennial in 11 months.

A petition has been started on Change.org to preserve the elegant old carriages.

—  Jerry Nelson is the co-author with Beatrice Murch of the photography book, ‘Buenos Aires Subte – Linea A‘. Profits from the sale of the book will be shared with the Friends of the Subway Association.